ChessGenius - A program written by the legendary Richard Lang in the 1990's, originally for MS-DOS, that has been ported to Palm, Windows Mobile, Bada phones, Symbian phones, iOS, and Android devices.

Richard Lang is famous for winning the World Microcomputer Chess Championship 10 times, from the mid 1980's with Mephisto to the mid 1990's with ChessGenius. ChessGenius became the first chess program to beat a world champion (none other than Gary Kasparov) at a non-blitz time control, and obtained a rating of 2795 in the same tournament (1994 Intel World Chess Grand Prix), while running on a 100 MHz Pentium PC.

ChessGenius is known for being strong on small hardware, and that carries over to modern smartphones and tablets. Here are some of features for the iOS and Android versions (as listed at the ChessGenius site):

Small and compact
Incredibly strong play
Excellent play even on the 'instant' level. Does not require a network connection.
Thirty three playing levels
13 easy levels. ChessGenius makes deliberate mistakes.
Ten time based levels. Instant, 1 sec, 2 sec, 3 sec, 5 sec, ... 3 mins.
Ten Blitz levels. Whole game in 1 min, 2 min, 3 min, 5 min, .... 120 min. The Chess clocks count down in these levels. You lose if you run out of time.
Thinking information. (Analysis)
Show analysis Option. It may, for example, show:
"1.03 05 cxd4 Nxd4 Nc6 Bb5" This means that:
ChessGenius is winning by 1.03 pawns. Search depth = 5, and line of moves. ChessGenius is planning cxd4 and expects Nxd4 in reply etc.
Landscape
Rotate your device to play with landscape display.
Chess Clocks
Total White and Black time and move time.
Make moves by tap and tap, dragging or keypad
Set-up position
Any legal position can be entered.
Take back and Step forward
Take back moves to start of game and Step forward to end of game.
Hint
Let ChessGenius suggest your move.
Opening name
For example ChessGenius may display "B12 Caro-Kann defence".
Next best move command
After ChessGenius has played a move "Next best move" will force ChessGenius to take back its last move and compute the next best move. This is useful for forcing ChessGenius to play a particular opening and for analyzing positions.
Players
Play against ChessGenius, against another player or watch ChessGenius play itself.
Analyze game
Like 2 player mode but ChessGenius calculates continuously and shows its thinking. Useful for replaying games to see where mistakes have been made.
Rules of Chess
Understands all the rules of Chess including, en-passant, under promotion, castling, draw by repetition and the 50 move rule. Announces a draw if there is insufficient material to win.
Save and Load games
Database features. ChessGenius can open PGN files on the SD card and can load and save games.
Copy and paste games to/from clipboard.
Tutor option
ChessGenius will warn if a blunder / weak move is played and give the option of take back.
Board colours
Choice of 7 board colours.
Show legal moves option
After selecting a piece ChessGenius shows where the piece can move to.
Show last move option
ChessGenius can indicate the previous move.
Championship
A 'Championship' icon is displayed if you have not used Hint, Taken back moves or viewed the analysis. Can you beat ChessGenius without help?
Five piece sets
Chose between Royal, Modern and Classic color sets (designed by Bryan Whitby) and the Alpha and Merida black and white sets.
Free updates 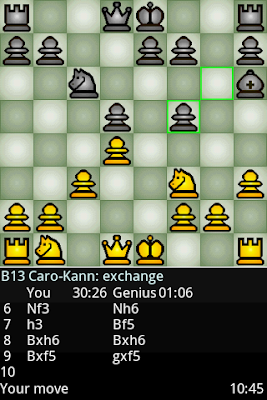 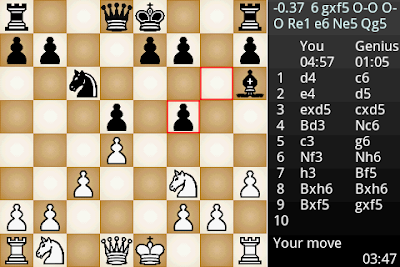 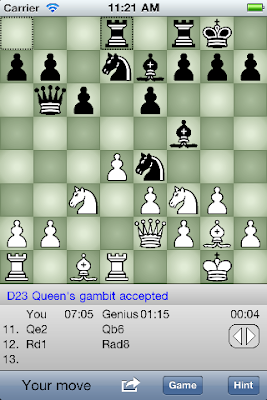 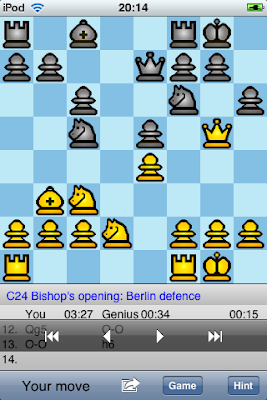 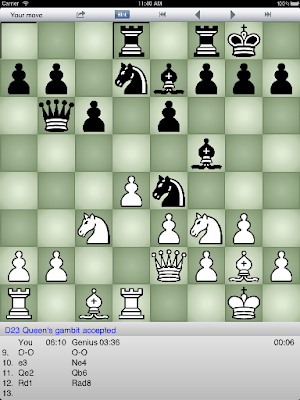